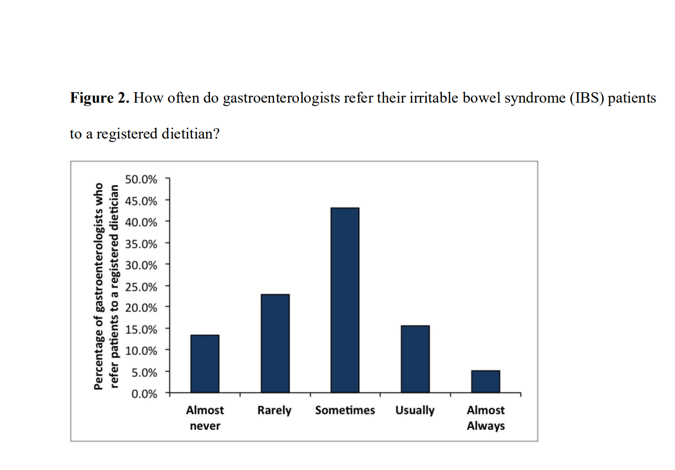 “Use of Dietary Management in Irritable Bowel Syndrome: Results of a Survey of over 1500 United States Gastroenterologists”, published online June 8, 2018, in The Journal of Neurogastroenterology and Motility, suggests that while patients are most likely to have heard about and tried a gluten free diet, doctors prefer a low FODMAP diet. However, patient education about the diet—and access to GI dietitians who can help them implement and follow the diet— is limited.

Overall, GI providers who participated in this survey expressed a favorable view of the value and effectiveness of dietary intervention in IBS patients. However, a discrepancy was identified between the initial type of diet utilized by patients and that which was recommended by physicians. There is increasing evidence to support the efficacy of the low FODMAP diet in IBS patients, and our observed disconnect highlights the need for increased patient education on this topic. Overall, this survey has highlighted the nationwide practice patterns of gastroenterologists regarding dietary therapies for IBS patients. It has additionally illustrated the need for dietitians knowledgeable in the dietary management of IBS.

Why is this survey important?

A complex relationship exists between diet and the trigger of GI symptoms in IBS patients, with an ever-expanding body of evidence to support a role for dietary therapy for this patient population.

Several dietary manipulations have subsequently been investigated in the treatment of IBS, including high-fiber diets, gluten-free diets, lactose-reduced diets, low fat diets, and diets low in fermentable oligosaccharides, disaccharides, monosaccharides, and polyols (FODMAPs). FODMAPs are short-chain carbohydrates that are poorly or incompletely absorbed in the small intestine and subsequently fermented by the gut bacteria, leading to the production of short-chain fatty acids and gases such as hydrogen, carbon dioxide, and methane. They are found in foods such as wheat, garlic, onions, sweeteners, and some fruits and vegetables. Gluten, on the other hand, is a storage protein commonly found in wheat, rye, and barley.

Nearly 60% of participants reported that their patients commonly associate food with GI symptoms, and these IBS patients most commonly use a trial and error approach followed by a lactose-free and gluten-free diet, and rarely use a low FODMAP diet on their own. Over half of providers recommend diet therapy to more than 75% of IBS patients and most commonly recommend a low FODMAP diet. Yet, only 21% of gastroenterologists commonly refer IBS patients to registered dietitians, and only 30% use GI dietitians. Female providers were more likely than males to recommend dietary changes as the primary mode of therapy.

What’s new here?
This is the largest survey of US gastroenterologist (GIs) addressing the use of diet therapies for irritable bowel syndromeIBS. It demonstrates that GIs have for the most part embraced diet interventions for their IBS patients and that while patients are most likely to have heard about and tried a lactose free and/or gluten free diet for IBS, doctors recommend a low FODMAP diet for IBS.

What Physicians Need to Know?
90% of the doctors s surveyed felt that diet was at least as, if not more effective as medical therapies for IBS. Doctors recommend diet therapies to the vast majority of their IBS patients – most commonly the low FODMAP diet which is a 3-step program that requires appropriate education. That being said, few gastroenterologists regularly refer their IBS patients to a GI dietician for counseling.

What is take-away-for patients?
Of diet therapies for IBS patients, the low FODMAP diet has the largest and most supportive body of evidence. If a patient is to start the low FODMAP diet, they should be aware that it is not just an elimination diet but a 3-step process of elimination, determination of sensitivities, and personalization (ESP). This 3-step process is best undertaken with a GI dietician. If insurance issues or access/availability makes meeting with a GI dietician impossible, obtaining appropriately vetted online or print information as can be found on www.myginutrtion.com, the GastroGirl site, or the Monash University mobile app, low FODMAP Central or books by Kate Scarlata or Patsy Catsos can also be helpful.

4 Ways to Personalize Your Plate for Gut Health

March is National Nutrition Month and this year’s focus is Personalize Your Plate!  Just as…