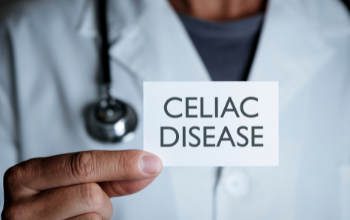 Celiac disease may seem like a straightforward condition with one simple rule: Avoid gluten at all costs. But the disease is much more complex than this and many myths about it are still being spread around today.

In honor of Celiac Disease Awareness Month, we had Dr. Jocelyn Silvester and Dr. Amelie Therrien on the Gastro Girl Podcast to separate fact from fiction. They are two of the authors of a review article published in The American Journal of Gastroenterology called Celiac Disease Fallacies and Facts.

Let’s take a deeper dive into each of the fallacies from the review article!

According to Dr. Silvester, “we are discovering that celiac disease is really everywhere”.

So where did this myth come from?

Dr. Silvester explains that “initially celiac disease was really recognized in Northern Europe and particularly in Ireland, and so it was thought that these were the places where celiac is.”

Once the technically to test for celiac disease and screen for genetic susceptibility became available, researchers found that celiac disease is actually a global disease.

Fallacy #2 Individuals with celiac disease are not obese

It used to be the case that children with celiac disease were malnourished because of the malabsorption caused by the disease. Once they were put on a gluten-free diet (GFD), they began to thrive again.

While the above certainly still occurs today, Dr. Therrien explains that celiac disease can also impact those who are at a higher weight. “Up to 30% of the adults and the children diagnosed are in fact overweight or obese,” says Dr. Therrien.

One possible explanation provided is that manufactured gluten-free products are often higher in calories and fat.

If you are new to the world of celiac disease, this alphabet soup may not mean much to you.

To break it down, IgA is short for Immunoglobulin A which is an antibody that is part of the immune system.

The first step in getting a celiac disease diagnosis is to get a blood test for tTG-IgA (Tissue Transglutaminase IgA) and total serum IgA.

If total serum IgA is low, then the tTG-IgA test may come back with a false negative. In this case, other tests will be needed to look for celiac disease.

It’s essential to work with your doctor to determine what celiac disease tests are right for you or your loved one.

If you’ve recently been diagnosed with celiac disease, you may expect your symptoms to improve within a few days of changing your diet. But according to Dr. Therrien, “the response to the gluten-free diet is not immediate.”

While many people will typically see improvements after a few weeks on a GFD, Dr. Therrien reminds us that celiac disease causes inflammation in the small intestine that can take weeks to months to recover.

Dr. Therrien explains that up to 15% of adults will have what’s known as “nonresponsive celiac disease”. In these cases, people still have symptoms after being on a GFD for one year after diagnosis. This is likely because they are still getting hidden sources of gluten from their diet or because of other food intolerances.

Fallacy #5 The GFD is mainly used to treat celiac disease

Dr. Silvester tells us that many people who are currently following a GFD do not have celiac disease.

Those who feel better on a GFD may have non-celiac gluten sensitivity (NCGS) or irritable bowel syndrome (IBS).

It’s important to consult with your healthcare provider before starting a GFD.

Fallacy #7 The GFD has solved the problem of celiac disease

A gluten-free diet can be very challenging to follow.

Dr. Silvester discusses a survey which found that following a GFD for celiac disease was more burdensome than treatments for type 1 diabetes. Much of this burden is due to the stress on the social aspect of eating.

According to the review article, “groups who particularly struggle with a GFD include the elderly, the illiterate, those with mental or psychological impairment, and those with limited financial means.”

It can also be a struggle to avoid cross-contamination when eating outside of the home.

A life-long GFD is recommended for those with celiac disease to heal damage to the small intestine and prevent further damage.

But is there any wiggle room?

Dr. Therrien describes a study which found that even the amount of gluten equivalent to a few bread crumbs lead to intestinal damage.

The US Food and Drug Administration (FDA) set the standard for gluten-free labeling at less than 20 parts per million (ppm). To put this into perspective, this would only be a fraction of a small breadcrumb.

Fallacy #9 Most patients with known celiac disease follow a GFD

Some people with celiac disease consume gluten intentionally for various reasons. Although the goal is to avoid gluten as much as possible.

Dr. Silvester tells us that it’s almost impossible to completely avoid gluten, even for those who are very diligent. Ultimately, zero gluten isn’t necessarily the goal and patients who are doing their best to void gluten are probably doing enough.

Fallacy #10 A GFD is sufficient therapy for celiac disease

Dr. Therrien tells us that researchers are working to develop treatments for those that are nonresponsive to a GFD. There is also research being done to improve tolerance to gluten for those with celiac disease.

You can learn more about being involved in a clinical trial here.

6 IBS Myths Debunked by a Gastroenterologist

IBS can often be a misunderstood condition, so we invited Brian Lacy, PhD, MD, FACG…