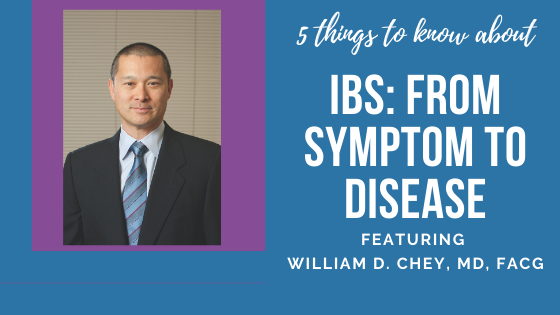 In a recent Healio Gastronenterology article, Dr. William Chey, of the University of Michigan, explained the challenges of IBS and why we need to create a future in which we can identify an effective solution for some IBS patients that is based on a more personalized medicine approach.

Dr. Chey points out that IBS is a symptom-based condition defined by the presence of abdominal pain and altered bowel habits.

IBS—being a symptom-based condition—isn’t one disease, according to Dr. Chey. “It’s likely several different diseases that happen to present with the same symptoms. Yet, given our current understanding and a lack of validated biomarkers, we cannot parse IBS patients on the basis of pathophysiological abnormalities. Instead, we rely upon symptoms to establish a diagnosis and choose a treatment.“

Read the full article: IBS: Transitioning from a Syndrome to a Disease, in Healio Gastroenterology

Irritable bowel syndrome (IBS) is a disorder of bowel function (as opposed to being due to an anatomic abnormality). Patients who suffer from irritable bowel syndrome have changes in bowel habits such as constipation or diarrhea, and abdominal pain along with other symptoms including abdominal bloating, and rectal urgency with diarrhea. In addition, IBS may be associated with a number of non-intestinal (“extraintestinal symptoms”), such as difficulty with sexual function (pain on intercourse or lack of libido), muscle aches and pains, fatigue, fibromyalgia syndrome, headaches, back pain, and sometimes urinary symptoms including urinary urgency, urinary hesitation or a feeling of spasm in the bladder.

In the United States, it is estimated that 10-15 percent of the adult population suffers from IBS symptoms, yet only 5 to 7 percent of adults have been diagnosed with the condition. IBS is the most common condition diagnosed by gastroenterologists and one of the most common disorders seen by primary care physicians.

The exact cause of irritable bowel syndrome is not known. However, tremendous advances in our understanding of this common and disabling disorder have been made in the last 10 years. Abnormal motility in terms of the bowel moving too fast (which causes diarrhea) or too slow (which causes constipation) is certainly part of this syndrome. However, this represents only one part of a complicated disorder. The symptoms of pain, incomplete emptying of the bowels, and bloating cannot be explained only by abnormal gut GI motility. Over the last 20 years a number of very well done scientific studies have demonstrated that individuals with IBS tend to have higher levels of sensitivity in the intestines compared to individuals who do not have IBS.

Source: The American College of Gastroenterology