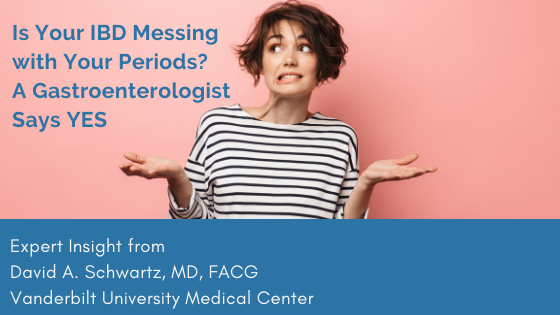 If you have inflammatory bowel disease (IBD), talking about topics that other people may find embarrassing has probably become quite natural for you. It may have been a challenge at first, but giving your doctor detailed accounts of your bowel habits is now as effortless as discussing the weather.

While the focus of IBD symptoms and treatment tends to be on the digestive system, if you’re a woman living with IBD, it’s important for women to also understand the effect IBD can have on the menstrual cycle. Many women think that their gastroenterologists do not want or need to hear about their periods, but this could not be further from the truth!

David A. Schwartz, MD, FACG, Gastroenterologist and Director of the Vanderbilt University Inflammatory Bowel Disease Center, has helped answers your most pressing questions about the role IBD plays in puberty and the menstrual cycle.

Before we dive into the effects of IBD on the menstrual cycle, let’s talk about how IBD can influence the start of puberty.

Dr. Schwartz also highlighted that when scientists focused on women with Crohn’s disease (CD), they found that the average age of their first period was 13.9 years old (compared to 12 years old for the control group without CD).7

It’s important to remember that these are just averages and the onset of puberty can be even later. Per Dr. Schwartz, research showed that “73% of kids with CD” had their first period at 16 years old or later. Whereas no one in the control group started their period that late.

While it’s clear from the research that IBD can delay puberty, this isn’t necessarily true for every girl with IBD. Dr. Schwartz notes that “risk factors for delay include growth failure, malnutrition, low BMI, steroid use and active disease.”1,4,5,8

Managing these risk factors is a top priority for gastroenterologists and the entire treatment team. “Achieving remission usually leads to onset of [the first period]”, says Dr. Schwartz. This is why remission is such an important goal when it comes to the treatment of IBD.

We’ve talked in detail about IBD and puberty, so let’s now move on to discussing IBD and your menstrual cycle.

Can IBD mess with my menstrual cycle?

If you’ve noticed that your menstrual cycle is out of whack since your IBD symptoms first started, you are not alone! According to Dr. Schwartz, “women with IBD often have irregular cycles”11 But what does irregular actually mean?

Having an irregular cycle could mean that your period is heavier or lighter or that the length of your cycle is longer or shorter. Based on the research, 25% of women with IBD have a change in cycle interval and 21% experience a change in their flow.11

IBD can also make your periods more painful. In fact, when researchers looked specifically at women with IBD and menstrual cramps, 40% of them had more intense menstrual pain.11

If your IBD has caused changes in your menstrual cycles, it’s important to discuss this with your gastroenterologist and OBGYN. Fortunately, Dr. Schwartz notes that “cycle regularity increased over time” according to the research.11

Does my period cause IBD flares?

“It is very common for women with Crohn’s disease to experience symptoms during their premenstrual and menstrual phases of their cycle,” says Dr. Schwartz.2,9,3,10

If you find that your IBD gets worse around your periods, it’s important to tell your doctor about this. Dr. Schwartz tells us that it’s “important to recognize this association so [your doctor does] not mistakenly treat [your symptoms] as a true flare.”

Even though your symptoms will not be treated as a flare, it doesn’t mean that you have to suffer through them each month.

Per Dr. Schwartz, hormonal contraception (birth control pill, IUD, etc.) may help if the symptoms are severe. He notes a study which looked at women with IBD who had an increase in their symptoms around their periods. The researchers found that 19% of these women improved with estrogen-based treatment and 47% improved with use of an IUD.6

If you have severe symptoms during your period, you should work with your treatment to help you get relief.

Now that you know the impact IBD can have on your menstrual cycle, it’s essential to talk to your gastroenterologist about all of your symptoms. Not just your digestive symptoms. Talking openly about IBD and women’s health can also help raise awareness around these issues for others. Let’s break the silence together!

This article is brought to you by: