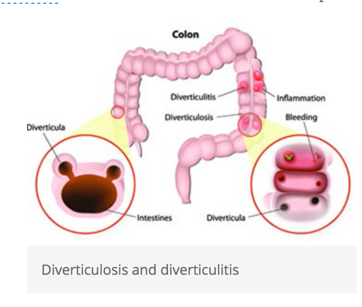 Men who follow a healthy lifestyle have a lower risk of developing diverticulitis, according to a recent study published in The American Journal of Gastroenterology.

Diverticulitis is an inflammation of small pouches in the walls of the colon and it has become one of the most common reasons for gastrointestinal hospital admission in the United States, costing an estimated $2 billion each year, according to the researchers.

“Diverticulitis is actually a very common disorder and it’s really become apparent that we need to think of ways to prevent diverticulitis given that it affects so many people,” Dr. Andrew Chan, the study’s senior author, told Reuters Health.  Dr. Chan, is a researcher at Massachusetts General Hospital and Harvard Medical School in Boston.

“To date, there really has been very little research done in this area, so we were interested in really understanding what places people at risk for diverticulitis, and what among (those risk factors) are modifiable so that we can try to advise people to do what they can to either prevent their first episode of diverticulitis or if they’ve had diverticulitis, potentially prevent a future episode,” he told Reuters Health. 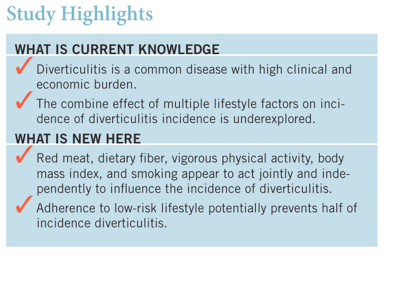 Sources:
Adherence to a Healthy Lifestyle is Associated with Lower Risk of Diverticulitis among Men, The American Journal of Gastroenterology

Unhealthy Lifestyle May Cause Half of Diverticulitis Cases, Reuters Health