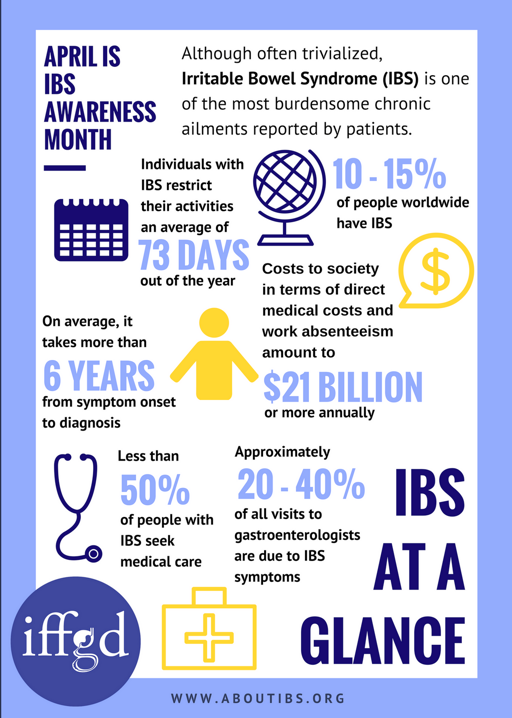 Irritable bowel syndrome (IBS) is one of the most common and burdensome chronic conditions, reported by patients, according to the International Foundation for Gastrointestinal Disorders (IFFGD). With an estimated 30 to 45 million people in the United States — 10 to 15 percent of the population — affected by IBS, it’s the second leading cause of work absenteeism (second only to the common cold) and was found to cause those affected to restrict their personal and professional activities an average of 20 percent of the year (73 days).

IBS is typically characterized by recurring or chronic bouts of abdominal pain in association with a change in bowel habit (such as diarrhea or constipation). The pain may be relieved following a bowel movement and may be worsened after eating. Symptoms of IBS can flare-up unexpectedly and can change over time or even from day to day. Other symptoms may also occur, such as bloating, gas, or urgency.

But, despite the high prevalence and well-documented burden, much about IBS remains unknown, and myths and misconceptions about the disorder are common among patients as well as the general public, according to the IFFGD.

“Despite being very common, many with IBS are reluctant to openly talk about their symptoms or seek medical care,” said Ceciel T. Rooker, President  of IFFGD, a registered nonprofit organization dedicated to improving the lives of people with IBS and other chronic gastrointestinal (GI) disorders. “They may feel uncomfortable discussing their symptoms, even with their doctor, because of social taboos surrounding bowel symptoms.”

April is IBS Awareness Month. First designated by IFFGD in 1997 to bring awareness to this often misunderstood and stigmatized condition, IBS Awareness Month is now recognized nationwide. During this time and throughout the year, IFFGD is committed to raising awareness and breaking down taboos which may keep affected individuals from obtaining a diagnosis and receiving appropriate care.

“It’s important to encourage open and honest conversation about IBS symptoms and quality of life issues and remove barriers that may prevent those affected from enjoying a normal, active life,” Rooker explained in a press release.

Here are some IFFGD resources to help you and your loved ones:

How to Talk to Your Doctor

Tools to Manage Your Health