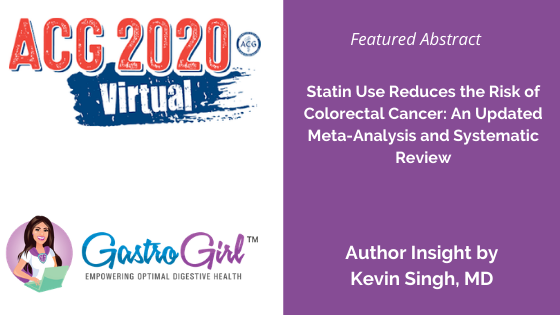 Oral 3 Statin Use Reduces the Risk of Colorectal Cancer: An Updated Meta-Analysis and Systematic Review

Our meta-analysis included 52 studies and over 11 million patients. In this study, statin use was associated with an estimated 20% risk reduction for colorectal cancer (CRC) in the general population, which may be greater than previous reports. In a separate analysis, statin use was associated with a 60% risk reduction of CRC in populations with Inflammatory Bowel Disease (IBD), but this analysis included only observational studies. Statins appear to play a significant role in risk reduction for CRC in the general population and should be considered among efficacious chemopreventive agents for CRC in this population. In the IBD population, an otherwise high-risk population, prospective randomized trials are needed to confirm the risk reduction of CRC in this context.

What do patients need to know?

Colorectal Cancer (CRC) is the fourth most frequently diagnosed cancer worldwide and is the second leading cause of cancer-related mortality in the United States. Chemopreventive medications or mediations used to lower the risk of cancer, have been studied for CRC. Aspirin and other non-steroidal anti-inflammatory drugs have been effective for risk reduction of CRC but are associated with significant adverse events including an increased risk of bleeding. Statins are generally safe, well-tolerated medications and are among the most frequently prescribed medications worldwide. As a result, statins are being studied as a potential chemopreventive medication for CRC.

In our study, statin use was associated with a significant risk reduction for CRC in the general population and in patients with Inflammatory Bowel Disease such as Crohn’s disease or Ulcerative Colitis. Patients who are considering using a statin for this purpose, should consult with a physician to determine eligibility.