When it comes to bowel movements, one of the most common questions people ask their doctor is “what is normal” in terms of frequency and consistency. But this often varies between individuals. Well, for the first time, researchers have evaluated and defined self-perceived normal bowel frequency and consistency in a large representative sample of adults in the general US population. From their findings, the researchers confirmed the commonly accepted “3 and 3” metric. This means you’re  in the normal range if you’re having between three bowel movements per day to three bowel movements per week.  But the researchers also confirmed that men and women should have different criteria for normal bowel consistency and identified key demographic risk factors for abnormal bowel habits, including Hispanic ethnicity.

The study, Characterizing Normal Bowel Frequency and Consistency in a Representative Sample of Adults in the United States (NHANES), by Anthony Lembo, MD, and colleagues of the division of gastroenterology at Beth Israel Deaconess Medical Center and Harvard Medical School in Boston, was published in The American Journal of Gastroenterology’s “Putting Patients First” special issue. The “Putting Patients First” issue includes studies using patient-reported outcomes and highlights patients’ experiences with their disease.

In the study, participants used the Bristol Stool Form Scale Chart (BSFS), which is commonly used to classify the form of stool into seven categories. It is used in both clinical and experimental fields. It is sometimes also referred to as the Bristol stool chart (BSC),[or BSF scale.

Here’s an overview of the findings;

In the present study, 90% of the sample reported 3–21 BMs per week. In addition, 90% of individuals reported their most common stool type between 2 and 6, although this varied by sex. Among men, 90% reported a BSFS between 3 and 5, while for women it was between 2 and 6. These findings contribute to existing literature by supporting the common “3 and 3” metric of normal bowel frequency (i.e., 3 BMs per day to 3 BMs per week), however, they also suggest that men and women should have different criteria for normal bowel consistency. 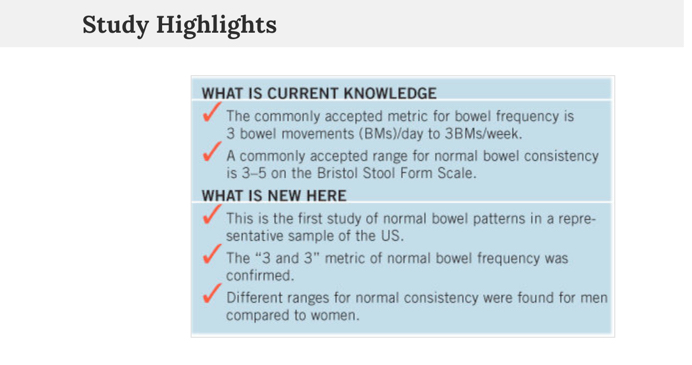