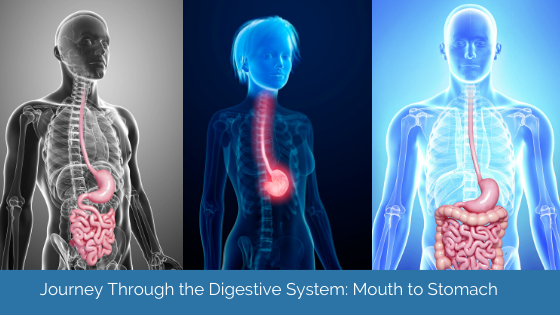 Let’s explore the functions of our digestive system from the mouth to the stomach and talk about the associated conditions.

Functions of the mouth

Our mouths start the process of breaking down the food we eat. We use our teeth to chew our food and our tongue moves food to the back of our throat so it can be easily swallowed.

Our saliva contains an enzyme called salivary amylase that is part of the first step in carbohydrate digestion.

Conditions of the mouth

Cavities, also called dental caries, are damaged areas of teeth that can turn into tiny holes. They are caused by bacteria and poor oral hygiene. A dentist treats cavities using procedures such as fillings or crowns. For prevention, adopting habits to support oral health like daily brushing and flossing is recommended.

Oral thrush is characterized by a white coating on the tongue and is caused by the infection of a fungus called Candida albicans.

Functions of the esophagus

A small flap of tissues called the epiglottis folds over your windpipe to prevent you from choking. Food instead enters the esophagus where peristalsis moves food along the esophagus. Peristalsis is the contraction and relaxation of the muscles of the esophagus to create a wave-like movement that pushes food into the stomach.

Conditions of the esophagus

Dysphagia is used to describe any problem with swallowing, whereas odynophagia is pain associated with dysphagia.

Swallowing difficulties can be caused by a wide variety of factors including injury, blockage of the esophagus, infections, or certain types of cancers.

A speech language pathologist or occupational therapist needs to assess the severity of the dysphagia and recommend an appropriate consistency of liquids and solid foods.

Esophagitis caused by GERD may progress into Barrett’s esophagus.

Functions of the stomach

The digestive juices in the stomach are mixed with food and muscle contractions help churn the food and stimulate digestion.

Conditions of the stomach

Gastritis is inflammation of the stomach caused by anti-inflammatory drugs, excessive alcohol use, surgery, or other stomach conditions. A soft diet is the typical nutritional approach.

Gastroparesis is a condition characterized by delayed emptying of the stomach contents into the small intestine (delayed gastric emptying). It can be caused by nerve damage.

A peptic ulcer is an open sore in the stomach. Many peptic ulcers are caused by the Helicobacter pylori (often called H. pylori) bacteria. If H. pylori is the cause, then antibiotics are the standard treatment. If not, then the peptic ulcers can be treated with acid-lowering medications, diet therapy, and surgery if needed.

Katelyn Collins, RD is a registered dietitian specializing in irritable bowel syndrome (IBS) and digestive health. Katelyn’s personal experience with IBS first sparked her passion for nutrition and health. Since then, she has been a vocal advocate for the digestive health community and has dedicated her own nutrition practice to serving those with digestive conditions.